Kevin Kihara is a musical talent that you don't run into every day. Charming and poised, this Bay Area native plays gentle, hypnotic, and melodic rhythms on one of the youngest instruments in the world - the steel handpan, an instrumental-cousin of a steelpan.

During a difficult period in his life, when Kevin spent eight years caring for his father, who had been diagnosed with Parkinson's, Kevin found solace in learning how to play a new instrument, the steel Halo.  He began performing in public spaces in Berkeley to quiet his own mind, and found his playing was able to ease stress in others as well.

Now having been playing the handpan for more than 7 years, Kevin’s music can best be described as soulful, uplifting, and healing. Though performances are most often improvised, his music gains rhythmic presence through intertwining with Kevin’s original-composed melodies. Kevin has performed with Hope Medford (hand drummer for world roots rock band, Medicine for the People), Mikey Pauker (world/folk singer-songwriter), David Sunshine Galleher (handpan player and maker of Makai Instruments), Madhu Anziani (vocalist, beatboxer, and loop station master), and MJ Lee (singer-songwriter and violinist). He has performed at venues such as the San Francisco’s Palace of Fine Arts, Oakland’s Chapel of The Chimes, LinkedIn, Kava Kava Bar in Berkeley, Impact Hub SF, Ojas Yoga Center in El Cerrito, Oakland’s Namaste Yoga Wellness Center Grand Lake, and Laney College in Oakland. He has also performed for nonprofits such as The Dancing Cat in San Jose, Sutter Care at Home SF and San Mateo, and Maitri Compassionate Care in San Francisco.

In recent years, Kevin has become a maker of handpans himself (Kihara Steel) and currently performs using his own creations, these are called Hara.
Listen to my story on KALW 91.7 Cross Currents. 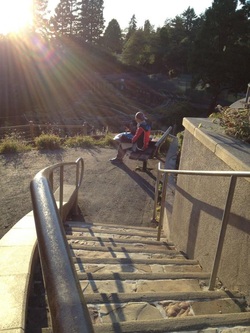 A young man's music transforms personal loss and also public spaces
By Luisa Beck
Parkinson's Disease affects more than just those diagnosed with the disease; it can become part of the lives of the people around them too. Kevin Kihara dropped out of school to spend eight years caring for his father, who was diagnosed with Parkinson's. To cope with his father’s passing, Kevin learned how to play an instrument called a Halo — a steel drum with a gentle sound — and began performing in public spaces in Berkeley.

“My name is Kevin Kihara, and I'm from El Sobrante, California. I play an instrument called the Halo. And the Halo is basically a steel drum.

“The basic shape is, if you could picture, it's convex. Picture two of those shells stacked on top of each other bottom to bottom. You have that and it basically looks like a UFO.

“What I love about the instrument is that when you're playing it, you are connected with it, because it's sitting on your lap. When you're touching the metal with your hands, and then you're hitting the steel, the vibrations are going straight down, and you can feel it with your body. Basically, when you play a note, it activates other notes, it activates their harmonics.

“So when you start really playing it, you just get this singing bowl. And that's kind of what it was designed after too: the Tibetan singing bowls.

“For me, every time I’m playing I come to a place of peaceful consciousness.

“And that's a big reason why I want to help people: just seeing how debilitating that disease was for him and how helpless he was. I play with a picture that I have of me and him together, and I basically put that on the front of my Halo when I'm playing, to give me some inspiration and also to feel like I'm being watched over.

“When I play the Halo there are certain times I'm just playing this rhythm over and over again. And everything around me kind of just fades away. I kind of have the ability to forget about certain things, and it really puts my mind in a peaceful place.

“I tend to play at places that are very serene and have a very tranquil feel to them. The Rose Garden - you hear water running down the hill and it just smells great too. When you're at the top, you can see a good portion of the Bay during sunset, which is when I usually play. As the sun's coming down, it starts to shine across the Bay and also up into the sky, so sometimes you get these beautiful vibrant colors, and that's what I really love about playing during sunset.

“It has this iridescent, I guess, blue and purple, depending on the light of the sun. When the sun is on it, it can change from blue to purple to green to pink.

“It has this way of affecting people on an emotional level. I’ve had countless people come up to me and say, ‘Thank you.’ You can’t pay for those things.

“Yeah, if I can help people with this somehow, that will fulfill my life.”